Editor’s Note: This article, written in 2015, continues to be the most-read on 24×7‘s site. We hope it can provide you with the information you need as you test SpO2 sensors.

Monitoring SpO2, the saturation percentage of oxygen in the blood, has become a standard of patient care across the globe. Almost every patient monitor has a built-in or attachable capability to monitor this crucial vital sign. SPO2 is an indirect and noninvasive method of measuring oxygen saturation in blood. It should be tested along with all the other physiological parameters during preventative or corrective maintenance on a patient monitor, or stand-alone device.

SpO2 is measured at the periphery, usually a finger, and is one measure of the health of the cardiovascular and respiration systems. A pulse oximeter noninvasively measures the oxygen saturation of a patient’s blood. This device consists of a red and an infrared light source, photo detectors, and a probe to transmit light through a translucent, pulsating arterial bed, typically a fingertip or earlobe. Oxygenated hemoglobin (O2Hb) and deoxygenated hemoglobin (HHb) absorb red and infrared light differently. The percentage of saturation of hemoglobin in arterial blood can be calculated by measuring light absorption changes caused by arterial blood flow pulsations.

SPO2 is measured using a sensor, usually attached to the patient’s finger. There are two methods of SpO2 technology: transmissive and reflective. The transmissive method is the more commonly used of the two. As shown in figure 1, transmissive technology transmits red and infrared light through the finger to a photo detector.

Figure 1: Transmissive technology, the most commonly used form of clinical pulse oximetry. Click to enlarge.The other method used for SPO2 relies on reflective technology. As shown in Figure 2, this method has the transmitter and receiver in the same plane. Reflective SPO2 sensors can be placed on other areas of the anatomy than the finger, such as the forehead. 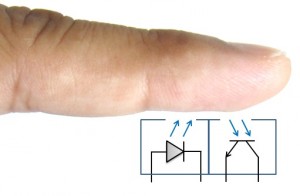 Each pulse oximetry device manufacturer must determine the accuracy of their device by conducting human testing. As Dennis J. McMahon explains in his white paper, “There’s No Such Thing as an SpO2 Simulator,”1 in a “controlled desaturation study, volunteer subjects breathe a sequence of gas mixtures of decreasing oxygen content while connected to a prototype monitor.” Arterial blood samples are then taken from the subjects to measure oxygen saturation in a clinical laboratory.

The result of this testing is a graph for that particular model of SPO2 sensor and monitor. This graph is referred to as an R-curve. As shown in Figure 3, an R-curve describes the relationship between the particular ratio of red and infrared light versus the observed oxygen saturation as collected during human testing. The R-curve is then used in the firmware for a particular instrument and for SPO2 testers. 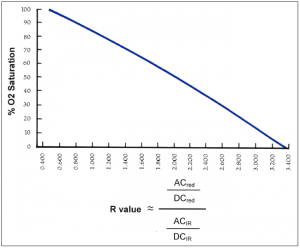 Figure 3: An example of an R-curve, correlating O2 saturation with the R value. Click to enlargeSimulators, calibrators, and functional testers for pulse oximeters are defined in the ISO standard 80601-2-61. Unlike other types of medical devices, pulse oximeters are not designed to be calibrated outside of the factory. There are no accepted methods for verifying the correct calibration of a pulse oximeter other than human testing. Most SpO2 test equipment on the market is in the functional tester category.